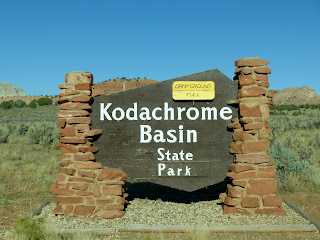 Since we'd already taken a little stroll on the Mossy Cave Trail, George wasn't thrilled about going somewhere else today.  I still wanted to go to Kodachrome Basin State Park--and it was only another 15 miles.

Kodachrome Basin was named in 1948 by a National Geographic Society Expedition in honor of the then revolutionary Kodak film that was celebrated for its color accuracy.  Now the cameras (and phones) are all digital and a lot of people only know about Kodachrome from the old Paul Simon song.

In a state with unusual geographical formations, the rocks here are....well....unusual.  There are more than 60 upright cylindrical chimneys called "sand pipes", ranging from 6' to 170' in height. 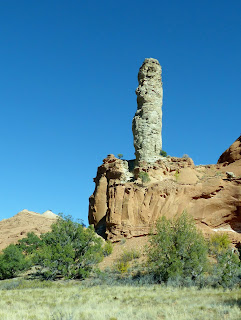 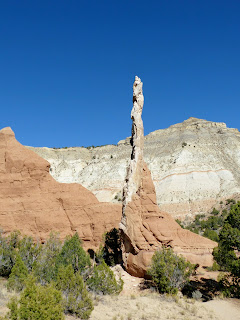 There are several theories about how these pipes were formed, which basically comes down to "the geologists don't have a clue".  I always want to know stuff like this, but "nobody knows" works for me too.

I couldn't talk George into hiking the 3-mile long Panorama Trail, but he agreed to drive up to the end of the road to see more formations.  Eagle's View Trail starts here, but it's closed. (Since it was closed because of erosion in 2010, I should probably have said "still closed".  Don't know why it's even listed in the park guide, but perhaps someone is optimistic that they will eventually rebuild the part that fell off or it will fix itself.) 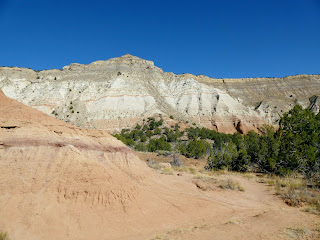 It was easy to talk him into Angel's Palace Trail.  Longer than Eagle's View (1.5 miles instead of .5) but not as steep (150' elevation gain instead of 500'), it's ADA accessible.  I figured George could handle that, even though we were over a mile high.  Sometimes higher elevation makes it hard for him to hike.  Parking is next to the campground. 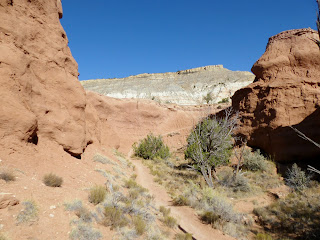 The trail zig-zags a lot and there are loops.  Sometimes it's a bit hard to follow the different colors of trail markers to know which way to go.  There's one loop that we didn't take because we thought it was a different trail.  Besides the pipes, there are other interesting formations here. 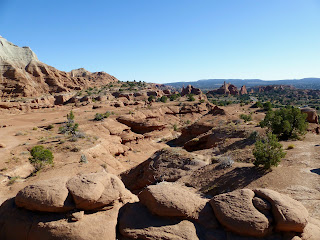 ...as well as some great views of Kodachrome Basin. 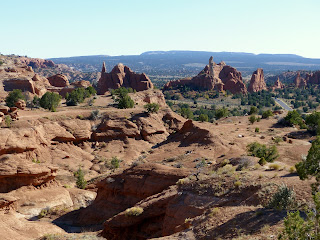 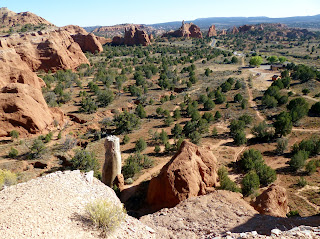 We got to the end of the trail...sort of.  Neither of was willing to walk all the way out onto this fin.  There's no guard rails and it's nowhere near wide enough for me!  I like the view from here, thank you very much. 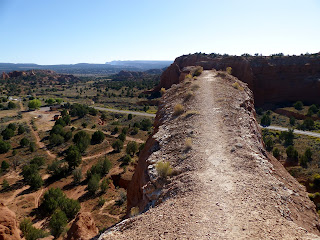 After we finished the loop and got back to the truck, we took a little drive through the campground.  It's a really nice one, with spacious sites, and about a third have power.  George said he'd be willing to stay here sometime, even without full hookups.  (Yahoo!!! I'm thinking one year when we go south for the winter, we can go to Moab again, then pick up Hwy. 12 at Torrey.  That'll give us the rest of the Scenic Byway and more country we haven't seen yet. I'll plan in advance and make reservations at the campground.) 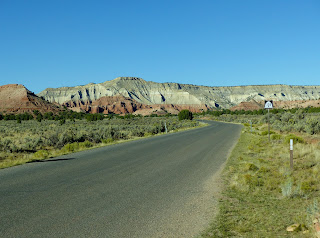 Scenic Byway 12 is Utah's only All-American Road.  I didn't think I could talk George into the whole 129 miles to Torrey, but sometimes you do this sort of thing in bits and pieces.  Escalante sounded good, but I'd settle for Cannonville if he'd agree to Kodachrome State Park. 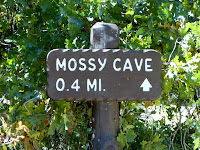 We passed the junction for Hwy. 63 into Bryce Canyon National Park because I was saving that for another day.  Four miles later, I saw the sign for the Mossy Cave Trail parking area alongside the road.  We stopped to go on the short hike.  George really wasn't getting into the purpose of my route for this trip south--to return to places we'd already been, then explore new things or favorites.  To break him into it gradually, I had to promise it would be a short hike.

When people ask me what my favorite place has been on this whole journey, I always tell them it's the red rocks in Utah.  I don't care if they're sculptured hoodoos, slick, stacked or arched.  The rocks high above this trail fit the criteria. 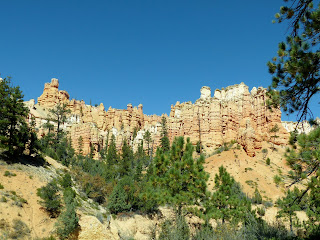 I kept getting a glimpse of windows in the rocks on the rim.  It was sort of a "now-you-see-it,-now-you-don't" peek, but I kept my eyes open and up. 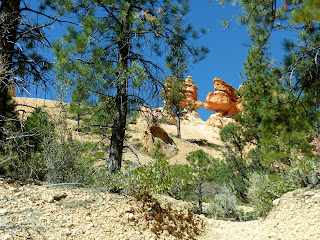 The trail runs along the Tropic Ditch.  In 1892, Mormon farmers diverted water from the East Fork of the Sevier River over the cliffs of Bryce Canyon into the Tropic Valley for irrigation. 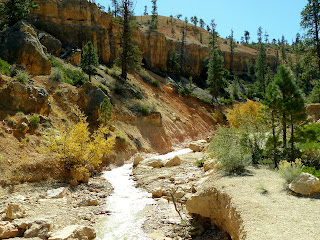 We met another couple along the trail, and continued with them.  Nice people caravaning with friends heading to Arizona for the winter.  The season begins early for some snowbirds.


After the trail crosses the ditch, it forks and goes to either the waterfall or the cave. We all opted for the waterfall first.  This was not a major decision.  I didn't think it would really matter since I'd planned to see both anyway.  It wouldn't make the short hike much longer. 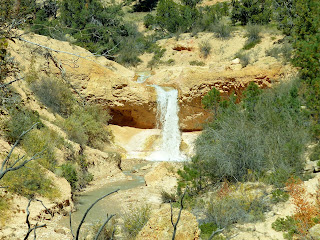 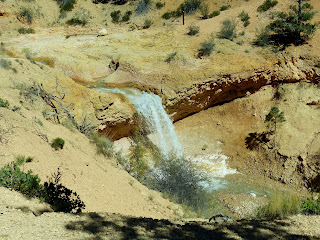 Finally got a chance to see the windows I'd seen earlier.  I counted 4, George thinks there are 5.  Pretty sure one of us right. 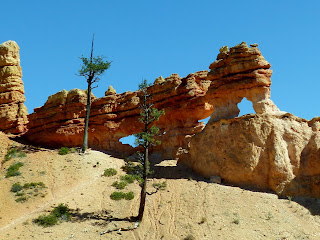 Next up was the cave.  I knew it wouldn't be Mammoth or Carlsbad, but unless there's more of it below the viewpoint, I'd hardly qualify it as a cave.  (The park calls it a "grotto"--I would have said "overhang".)  Glad we went to the falls first. 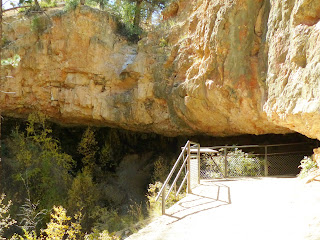 When we got back to the truck, we exchanged name cards with Vern and Barbara.  Hope to see them in Arizona this year. 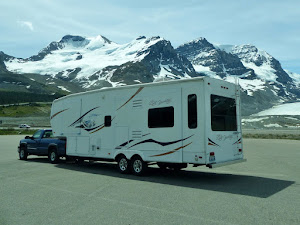 On the road to Alaska!

Jane Dodge
WHERE WE ARE GOING NEXT, Seward, AK, United States
Since we started traveling right after I retired the end of 2010, we've visited all of the lower 48 states! We had lots of fun doing it, saw some beautiful country, learned more history, geography and geology than I expected. Right now we're somewhere in Alaska, returning to Washington in late August. Connectivity is intermittent, so I'll catch up occasionally. Be sure to come back. Make comments.